Marie Joseph Paul Yves Roche Gilbert du Motier, Marquis de Lafayette was born in 1757. Before his second birthday, his father, Michel de Lafayette, was killed at the battle of Minden during the Seven Year's War. At the age of twelve, his mother and grandfather died, leaving him a young, wealthy orphan. On April 9, 1771, at the age of fourteen, Lafayette entered the Royal Army. When he was sixteen, Lafayette married Marie Adrienne Francoise de Noailles — allying himself with one of the wealthiest families in France.

At a dinner on August 8, 1775, Lafayette heard the Duke of Gloucester speak with sympathy of the ongoing struggle in the colonies. He made clandestine arrangements with Silas Deane, a liaison between France and the colonies, to travel to America and join the revolutionary cause.

He landed near Charleston, South Carolina, June 13, 1777, then travelled to Philadelphia, where he was commissioned a Major General on July 31. This reflected his wealth and noble social station, rather than years of battlefield experience — he was only 19 years old. The newly commissioned young general was soon introduced to his commander-in-chief, General George Washington, who would become a lifelong friend.

Lafayette was wounded during the September 11, 1777 Battle of the Brandywine. In December, 1777, he camped with Washington and the army at Valley Forge. As the Conway Cabal unfolded, Lafayette sided with Washington. He wrote a long letter to Washington in which he pledged his loyalty. Washington replied, conveying his sincere appreciation for the Frenchman's support. 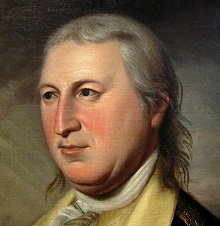 General Horatio Gates had convinced Congress to appoint a Board of War, over which he would have complete control. Knowing how loyal Lafayette was to Washington, Gates urged that Lafayette should command the expedition. Congress agreed to the campaign and gave Gates authority to work out the details.

Gates wrote a letter to Washington, informing him that Congress had approved the invasion of Canada and also that he had appointed Lafayette to command the expedition. Lafayette did not want to accept the appointment, but Washington overruled his objections and Lafayette reluctantly accepted. Lafayette travelled to York, Pennsylvania, which served as the capital from September 1777 to June of 1778, and began to carry out plans for the proposed expedition. On February 17, 1778, Lafayette rode to Albany New York, the staging point for the Canadian invasian.

The proposed Canadian expedition began to fall apart. It was clear to Lafayette that the troops and supplies at his disposal were inadequate. Other generals, including Schuyler, Lincoln and Arnold agreed. Compounding matters, Lafayette discovered that many of the troops he was to command were owed back pay totalling over eight hundred thousand dollars.

In a letter to Washington dated February 23, 1778 Lafayette describes the grim situation:

I have written lately to you my distressing, ridiculous, foolish, and indeed nameless situation—I am sent with a great noise at the head of an army for doing great things, the whole continent, france and europe herself by in by, and what is the worse, the british army are in expectations-how far they will be deceived, how far we schall be ridiculized, you may judge very well by the candid account you have got of the State of our affairs.

Lafayette then reveals his suspicions that the entire Canadian campaign and his appointment to lead it was nothing but a ruse to remove him from the area, the better to conspire against Washington:

I fancy (between us) that the actual scheme is to have me out of this part of the continent, and general Conway in chief under the immediate direction of General Gates — how they will bring it up I do not know — but be certain some thing of that kind will appear