In a letter dated March 11, 1777, Arnold thanked Washington for his support:

I am greatly obliged to your Excellency for interesting yourself so much in respect to my appointment, which I have had no advice of, and know not by what means it was anounced in the papers. Congress undoubtedly have a right of promoting those whom, from their abilities and their long and arduous services, they esteem most deserving. Their promoting junior officers to the rank of major-generals I view as a very civil way of requesting my resignation, as unqualified for the office I hold.

Arnold, ever hot-headed and impatient, travelled to Philadelphia to get answers for himself. Because of an action that took place on the way — he successfully routed the British after they burned Danbury — he was appointed a major general, but without his seniority, effectively making him subordinate to those major generals who were his inferiors before before their promotion in February. This fact rankled Arnold, as did the outstanding account which he was due repayment for his expenses. Congress refused to restore his seniority. Washington went to bat for Arnold and submitted a letter to Congress commending Arnold. With nothing being done, even with the aid of the Commander-in-Chief, Arnold resigned in July 1777.

Unbeknownst to Arnold, in a letter dated July 10,1777 (one day earlier), Washington had sent a letter to John Hancock, then presideing over the Continental Congress, recommending Arnold again serve under Schuyler near Ticonderoga.

If General Arnold has settled his Affairs & can be spared from Philadelphia, I would recommend him for this business & that he should immediately set out for the Northern department. He is active-judicious & brave, and an Officer in whom the Militia will repose great confidence. Besides this, he is well acquainted with that Country and with the Routs and most important passes and defiles in it. I do not think he can render more signal services or be more usefully employed at this time than in this way-I am persuaded his presence & activity will animate the Militia greatly & spur them on to a becoming conduct. I could wish him to be engaged in a more agreable service-to be with better Troops, but circumstances call for his exertions in this way, and I have no doubt of his adding much to the Honors he has already acquired

When he learned of this opportunity, Arnold asked to put his resignation on hold. He immediately took off for the north. On August 8, Congress voted not to reinstate Arnold's seniority and he would never forgive them for the slight.

Upon his arrival in the north, Arnold was immediately embroiled in another war between states, as he had been early in his military career. Here two American generals were contesting for leadership. Most of the New Englanders backed Horatio Gates, while the New Yorkers in the areas were supporting General Schuyler. Arnold was torn, but threw his support to Schuyler since he was in similar straits as Arnold.

In early August, Arnold and a small force were dispatched to bolster the defenses of Fort Stanwix, under siege by the British. He accomplished this by a clever disinformation campaign: compelling a captured British soldier (whose brother remained Arnold's captive and whose well-being depended on his sibling's cooperation) to spread rumors among the British that several thousand American soldiers were heading to the fort, when in actuality he had less than a thousand. Arnold and the Americns entered a fort empty of the enemy.

Returning to the main force, Arnold found himself under the leadership of General Gates. It wasn't too long before the two men found a difference of opinion on tactical priorities at the Battle of Freeman's Farm (September 19, 1777) began. Arnold wanted to take the initiative, sending troops from the fort to meet the approaching British. Gates disagreed, but reluctantly acquiesced. Gates failed to credit Arnold and his forces with their participation in the Battle of Freeman's Farm in his report to Congress. Finally, Gates formally removed from Arnold's command a number of troops that Arnold had directed during the battle, but were not officially his to command. An argument between the generals ensued, and Gates relieved Arnold of his command for insubordination. 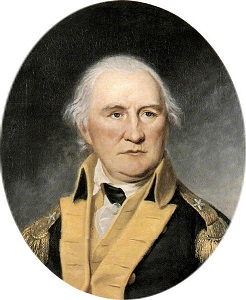 Arnold no longer had any reason to remain in the camp, but he stayed anyway. During the battle of Bemis Heights (October 7), he ordered his horse and charged into battle, conveniently ignoring the fact he had no official command. The sight of Arnold invigorated the troops and they rallied around him. In two severe assaults, Arnold led the men to push open the center of the enemy's line. Backed by Daniel Morgan and his riflemen, the pressure from the American forces was so strong, the British collapsed. As victory was near, Arnold's horse was shot and fell on the same leg that had been injured before. Arnold's actions, perhaps more than any officer there, led to the American success. Ten days later, Burgoyne conceded — and as a direct result, France came to the aid of the infant country.