Henry Knox (1750-1806) was born in Boston, the seventh of ten children by William Knox and Mary Campbell Knox, pioneers from North Ireland. William Knox was a shipmaster, carrying on trade with the West Indies. Suffering from financial difficulties and all the mental stress and burdens that go with money woes, William died at the age of fifty. Henry gave up school to support his family, becoming a clerk in a Boston bookstore, later opening one himself. He was an avid reader, fond of history and military science, especially artillery. His expertise in this field would become his chief contribution to the American Revoultion. 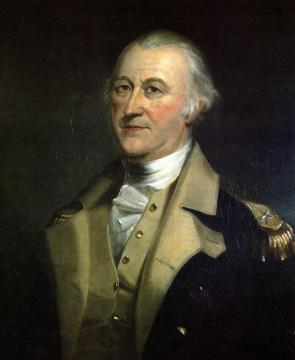 In 1772, Knox became a member of the Boston Grenadier Corps, a local militia group resisting British authority. In 1775, he served under General Artemas Ward during the siege of Boston, and handled artillery during the Battle of Bunker Hill in June. of 1775. Washington arrived in Boston in July, taking command of the Continental Army. The general was impressed with Knox''s command of artillery during the recent conflicts. Knox was commissioned a colonel, placed in charge of artillery, and tasked with bringing cannon from Ticonderoga (recently captured by Ethan Allen and Benedict Arnold) to Boston. Knox successfully brought fifty cannon to the city using ox sleds.

In March 1776, Washington seized Dorchester Heights (the key to Boston) and Knox placed the cannon in position there. General Howe, realizing the danger of an impending American bombardment, withdrew his troops from the city. On March 17, he embarked his troops for Halifax. The triumphant Americans marched into Boston the next day.

After the capture of Boston, Knox helped bolster the defenses of Connecticut and Rhode island, in preparation for the return of the British. Washington took his forces to defend New York. Knox joined the army there, as the British fleet arrived with 30,000 troops. The American forces numbered about 18,000. Knox had 520 officers and soldiers to handle his 120 cannon. The outnumbered American forces were forced to retreat, crossing the Delaware River at Trenton on December 8, 1776. The Americans had seized all the boats along the Delaware, so the British were unable to follow. On the evening of December 25, Washington made his famous trip back across the Delaware, directed by Knox, to surprise the Hessian forces at Trenton, capturing 1000 men and much-needed supplies, greatly boosting sagging American spirits. Knox was promoted to brigadier-general for his role in the successful mission.

Knox was almost displaced of his position in charge of artillery by Philippe Charles Tronson du Coudray, a French artillery officer, who had been recommended by Silas Deane, the American Minister to France. Though the Frenchman had valuable experience, Washington was not eager to put him in a position above Knox, writing to Congress on behalf of Knox on May 31, 1777:

"General Knox, who has deservedly acquired the character of one of the most valuable officers in the service, and who combating almost innumerable difficulties in the department he fills has placed the artillery upon a footing that does him the greatest honor; he, I am persuaded, would consider himself injured by an appointment superseding his command, and would not think himself at liberty to continue in the service. Should such an event take place in the present state of things, there would be too much reason to apprehend a train of ills, such as might confuse and unhinge this important department."

This was actually a political cartoon, titled:
The Horse America, Throwing His Master
It had nothing to do with Du Coudray, but everything to do with the American Revolution

Generals Nathanael Green and John Sullivan supported Washington, and Du Coudray was permitted to join the troops under Washington as a volunteer. He was to prove his ability as an engineer, but not given any preference over Knox. Unfortunately, in the late summer of 1777, Du Coudray was riding a spirited horse in search of Washington in Chester County, Pennsylvania. As he was about to enter a flat bottom boat to cross the Schuylkill River, he lost control of the horse, the horse and rider plunged into the river and drowned.

Knox was involved in fighting at both the battles of Brandywine and Germantown. He had a limited number of cannon. At Brandywine he placed them well near Chadds Ford, but the British forced a retreat. The Americans held them in check at Birmingham Meeting House and were able to retreat to Chester.

At Valley Forge, Knox was invaluable in organizing and erecting forts to safeguard the winter encampment from British attack. In the Weedon Orderly Book under January 3, 1778 at Valley Forge there is written of a General Court Martial, of which Colonel Scammel was President:

Capt. Courtley of artillery appeared before the Court, charged with leaving his Hoitz in the field in the action of Brandywine in a cowardly unsoldierly like manner. The Court having considered the charge and evidence are of opinion that Capt. Courtly is guilty of the charge exhibited against him and do sentence him as he has ever supported the character of a brave man to be reprimanded by Gen. Knox in presence of all the artillery officers." "The Commander in Chief is indeed from a state of all the evidence to disapprove the sentence and orders Capt. Courtley to be discharged from his arrest without censure.