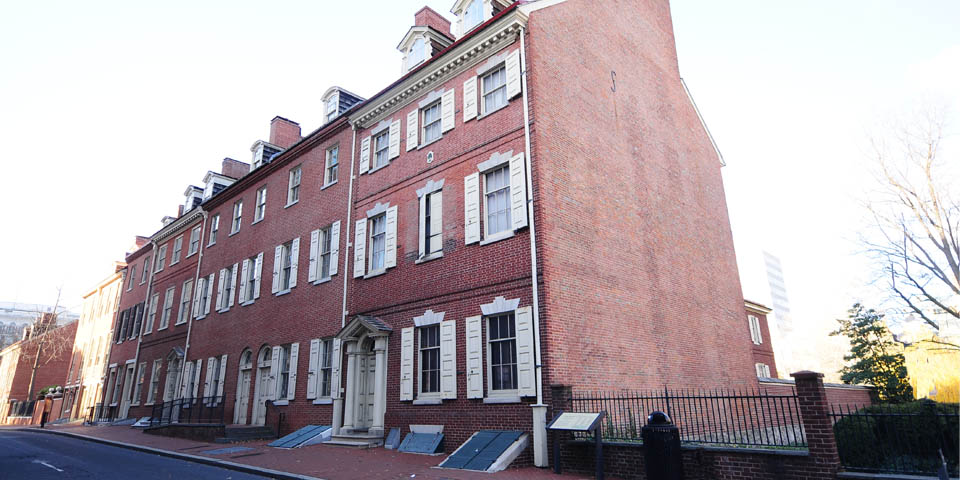 Clergyman to the Continental Congress.

In the early 1770s, Jacob Duche headed the Anglican Church in the colonies. However, the clergyman also supported the Americans in their ever-widening rebellion against the British. This did not set well with church officials in England who forced Duche to recant his views and called him home to England. It was William White who ultimately succeeded him and went on to become the first consecrated bishop of the Protestant Episcopal Church of America. He was the rector of Christ and St. Peter's Churches. White then went on to become the Bishop of the Protestant Episcopal Church of Pennsylvania. The Bishop was a beloved Philadelphia figure, in large part due to his charitable church work. Later in the 1790s, his stature grew when he ministered to those infected with Yellow Fever, while many other men of wealth abandoned the city.

The fine furnishings of the house indicate the elite social standing of the Bishop and his family. The Bishop's grandfather was landed gentry in England. His father settled in Philadelphia via Maryland. The Bishop was born in Philadelphia. The Bishop's wife Elizabeth came from a landed Virginia family. It is noteworthy that Bishop White's brother-in-law was financier Robert Morris. The Bishop's position in Philadelphia — he was Chaplain of the Continental Congress and later filled the same office for the United States Senate — meant that the important men and women of his time came here as guests. George Washington dined (though did not sleep) at the White House as a private citizen on November 19, 1798. John Adams, Ben Franklin, and Thomas Jefferson were also guests of the Bishop. A portrait of White by the renowned artist Charles Willson Peale hangs in the Second Bank/National Portrait Galley and shows his social standing. In the parlor are portraits of his grandparents executed by the school of Sir Godfrey Knoeller. The parlor was an entertainment center. Card-playing, conversation, and music would be the order of the day. In the parlor and the adjoining dining room one will note a profusion of Canton china. Pass onto a large kitchen which was responsible for feeding upwards of 18 daily. White owned no slaves and hired all his servants. Perhaps most unusual is the inside "necessary" — an uncommon feature at the time when most conveniences were found in the back garden.

The privies were emptied by servants who would wash the effluvia into Dock Creek. The put-upon stream, the mouth of which William Penn landed at in 1682, flowed in back of the Bishop's house. It received the dregs of tanneries directly behind the Bishop's house on Harmony Lane as well as manure from stables and household trash. The stagnant waters were likely a breeding ground for the dreaded mosquitoes that carried Yellow Fever that decimated the city in 1793 and ravaged Philadelphia again in 1797. Ultimately, the creek was filled in due to complaints from the citizenry.

Upstairs one will find Bishop White's library. Some time after his death, part of White's library was given intact to the Divinity School of the Protestant Episcopal Church and when the house was restored, the room was returned to be reinstalled. 150 books from his original library are on loan to the Park Service from the Divinity School. The house remained in the White Family for several years but ultimately passed into private hands. The last tenant before the Park Service was an insurance firm. Making the library restoration easier was a portrait of the library commissioned by White's granddaughter and executed by John Sartain upon the Bishop's death, according to family tradition. Also on the second floor is the Bishop's bedroom which he occupied alone for forty years after his wife's passing. Around the canopy bed is draped mosquito netting. Perhaps this fact, along with the clergyman's predilection for cigars and an occasional madeira left him untouched by Yellow Fever. The house has eight levels including a wine cellar, a root cellar, and an ice pit.

Copyright © 1999- by the Independence Hall Association, a nonprofit organization in Philadelphia, Pennsylvania, founded in 1942. Publishing electronically as ushistory.org. On the Internet since July 4, 1995.