The Declaration of Independence

When in the Course of Human Events... 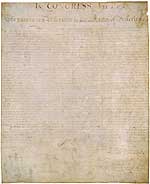 
The site also provides links to other Declaration-related biographies and histories. This site is a good resource for anyone curious about the Declaration and its history, or for the student who needs resources for his or her research paper.


Where is the original Declaration?
The original Declaration is now exhibited in the Rotunda for the Charters of Freedom in Washington, DC. It has faded badly, largely because of poor preservation techniques during the 19th century. The document measures 29-3/4 inches by 24-1/2 inches.
See picture.

What's on the Back?

People who watched the popular movie "National Treasure" want to know. On the back, at the bottom, upside-down is simply written: "Original Declaration of Independence / dated 4th July 1776." Regarding the message on the back, according to the National Archives, "While no one knows for certain who wrote it, it is known that early in its life, the large parchment document was rolled up for storage. So, it is likely that the notation was added simply as a label." There are no hidden messages.

You will find the following resources on this site:

The Signers of the Declaration of Independence
This section gives a profile of every delegate who signed the Declaration in 1776. You will find information such as birth-death dates, occupation, education, etc. Each signer also has a brief descriptive biography. A good resource for students.

More Information
A collection of orations and newspaper clippings