Anthony Wayne's grandfather, Captain Anthony Wayne, arrived in Chester County, Pennsylvania in 1722. Captain Wayne's youngest son, Isaac, received five hundred acres of land as his share of his father's estate. His home on the property from the bequest was Waynesborough, in Easttown Township, Chester County (approximately five miles from Valley Forge). It was here that Anthony Wayne was born in 1745. Wayne's penchant for mathematics led to his training as a surveyor, a field in which he worked for several years. In 1765, he was sent by Franklin and several others who owned land in Nova Scotia, Canada to survey the land and catalogue the natural resources there. After about a year in Canada, he returned to Waynesborough, where he developed the farm and established a tannery. He served in the Pennsylvania Legislature from 1774-1775. With the outbreak of war in 1775, Wayne raised a regiment and was made its colonel in 1776. He and his regiment were sent to Canada and at the Battle of Three Rivers he was wounded, and subsequently promoted to brigadier-general in February 1777. 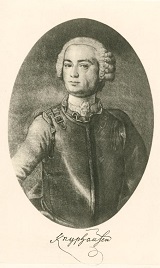 On September 11, 1777, the American and British forces met in the Battle of Brandywine. Wayne and his troops held off advances by Wilhelm von Knyphausen's Hessian and British troops, which crossed the Brandywine at Chadd's Ford. Wayne, outnumbered, was forced to withdraw. The American army eventually retired to Chester. From Chester, Washington wrote the President of Congress in Philadelphia, reporting details of the battle :

"The troops withdrew, but there was no panic, and they are in fine spirits, ready to meet the enemy...In the midst of the attack on the right, that body of the enemy, which remained on the other side of Chadd's Ford, crossed it, and attacked the division there under the command of General Wayne, and the light troops under General Maxwell, who after a severe conflict, also retired." 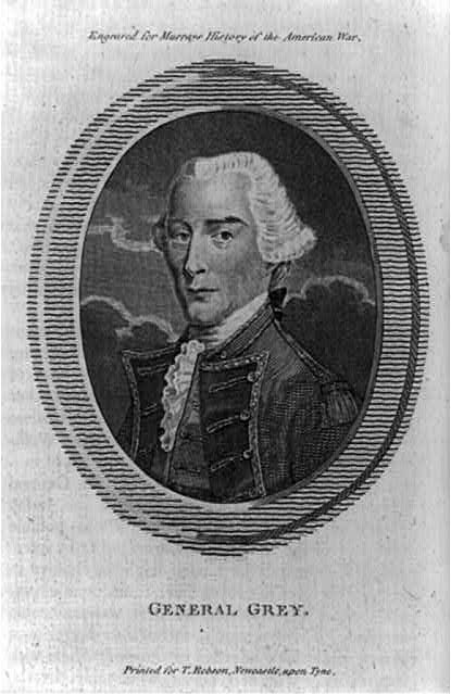 Seeking an opportunity for a counter-attack, Washington assigned Wayne 1500 men to harass the enemy's rear. On the night of September 20th, Wayne established camp about three miles southwest of the British lines, where the British and American forces played a game of cat and mouse. The British discovered Wayne was nearby as deserters or captured couriers arrived in their camp. Wayne was changing positions, knowing the British knew he was there. The British under General "No-Flint" Gray surprised Wayne and his forces. General Gray had ordered his regiments not to fire (thus the nick-name "No-Flint"), figuring anyone firing their weapon would be a rebel. The British used swords, bayonets, and their firearms as clubs. The 7th Pennsylvania Regiments, at the end of the column at camp lost the most soldiers, being at the head of the attack. In total, the casualties numbered 158.

General Wayne requested his own court martial to address his role in the massacre. Washington yielded to the request on October 24th. The members of the Court of Inquiry were General Sullivan, President, and Generals Muhlenberg, Weedon, Conway and Huntington; Colonels Stephens, Dayton, McClennachan, Stewart, Bradley, Davis, DeHart and Thackston. After due consideration, the court unanimously decided that Wayne

did every duty that could be expected from an active, brave and vigilant officer, under the orders which he then had. The Court do acquit him with the highest honor.

On October 4, 1777, shortly after the Battle of Germantown. Wayne wrote a letter to his wife in which he gave the following comment about the battle:

Upon the whole it was a Glorious day — Our men are in the Spirits — and I am confident we shall give them a total defeat the next Action; which is at no great distance.

In spite of Wayne's upbeat reporting, the battle was a loss for the Americans. The army retreated to the west, camping at White Marsh, Gulph Mills and eventually Valley Forge on December 19th. Wayne spent the winter in a house near the encampment, at the home of Joseph Walker and his wife, who was Wayne's cousin.

In February, 1778, Washington sent Wayne to New Jersey in search of food for the troops. He and his forces had minor skirmishes with the British, returning to camp in March. On March 4, 1778, he wrote to Washington, describing the details of recent skirmishes, noting towards the end::

I shall begin my march for Camp tomorrow morning. It was not in my power to move until I could procure shoes for the troops almost barefoot.

The Battle of Monmouth

When the British evacuated Philadelphia June 18, 1778, Washington withdrew his troops from Valley Forge the following day. By the 24th, the two armies were within a few miles of each other. Wayne wrote Washington urging an immediate attack. Washington followed Wayne's advice and ordered the attack, though most of his other generals diusagreed. Among them, General Charles Lee, disobeyed the order and retreated, leaving Wayne in a precarious position. Washington advanced with additional troops and Wayne reformed the lines, catching the British between the hills. The enemy advanced, but were checked by the Americans and eventually the British retired in disorder. During the night, the British withdrew and eventually reached New York. Washington reported to Congress:

On the Hudson River, at King's Ferry was a strong British fort, Stony Point, an important facet of the British defense along the Hudson. The fort had formidable defenses: It was about one hundred and fifty feet high, on a rocky bluff on the western side of the Hudson. Three sides were surrounded by water and the fourth by a swamp. The fort was garrisoned under the command of Lt Colonel Henry Colonel Johnston with a force of 500 men. For some time, Wayne had contemplated the capture of Stony Point, and eventually convinced Washington it could be done. Wayne assembled a small, elite cadre of soldiers from Connecticut, Massachusetts, Pennsylvania, Virginia and North Carolina for a daring and highly secretive mission. Washington approved of Wayne's carefully investigated plan and wrote to him:

That is should be attempted by the Light Infantry only, which should march under cover of the night and with the utmost secrecy to the enemy's lines, securing every person they find to prevent discovery.

On the night of July 15, 1779 Wayne and his men gathered at the foot of Stony Point. While they met heavy resistance, the element of surprise and the precision of planning and execution gave an edge to the American attackers. Wayne received a severe scalp wound, stunning him, but he pushed on and led the Americans to victory, capturing the fort and 543 British prisoners. Sixty-three British were killed. The Americans lost fifteen, while eighty-three were wounded. Wayne sent Washington a message reporting the victory:

The fort and garrison with Col. Johnston are ours. Our officers and men behaved like men who are determined to be free.

On July 16, Washington congratulated Wayne, the officers and troops on their outstanding victory. Congress unanimously passed resolutions praising Wayne and his men and awarded Wayne with a gold medal commemorative of his gallant service.

Wayne later was ordered southward by Washington in February 1781, but Wayne was held up in York, Pennsylvania and did not begin his march south until May. He met up with Lafayette's forces on June 7 at Fredericksburg. During the following weeks, the Americans eventually blockaded Cornwallis and his army by land and sea, and after some fighting, Cornwallis surrendered to Washington at Yorktown October 19, 1781. Wayne, exulting in the American victory wrote to Robert Morris on the 26th:

"Yet the resources of this country are great & if councils will call them forth we may produce a conviction to the world that we deserve to be free — for my own part, I am such, an enthusiast for independence, that I would hesitate to enter heaven thro' the means of a secondary cause unless I had made the utmost exertions to merit it."

After the surrender of Cornwallis, Wayne was ordered to take troops to South Carolina and thence to Georgia to drive the British out. His first objective was Savannah. As a result of several battles, Savannah was evacuated by the enemy on July 11, 1782. Greene wrote to Wayne under date of July 14:

"I am very happy to hear that the enemy have left Savannah, and congratulate you most heartily on the event. I have forwarded an account thereof to Congress and the Commander-in-Chief expressive of your singular merit & exertions during your command and doubt not that it will merit their entire approbation as it does mine."

Georgia was so appreciative of his service that thirty-nine hundred guineas were appropriated to purchase an estate for Wayne.

From Georgia, Wayne marched to South Carolina and after the British deployment from Charleston in December, Wayne marched in. In October 1783, Congress promoted Wayne to Major-General. He returned home to Waynesborough in 1783, in poor health. When he recovered, he took an active part in the Pennsylvania Assembly and was a member of the Constitutional Convention. Some financial difficulties led to the loss of his Georgia plantation.

In later years, General Wayne was appointed Commander-in-Chief of the United States Army by President Washington to subdue the Indians in the northwest territory. Wayne began at once to reorganize the army. In May 1793, he established his camp at Fort Washington (near the present location of Cincinnati.) He established a camp, Greeneville, in honor of his friend, Nathanael Greene, and another fort, Fort Recovery. After fighting for some time, the Indians in August, 1795, concluded a treaty at Greeneville. Wayne returned home after a three year absence for a short time. He was given a unusual welcome in Philadelphia and his native Chester County. He returned west to conclude some national business, where he died at Fort Presque Isle in 1796. In 1809, his son, Colonel Isaac Wayne, removed his remains and with appropriate ceremonies, they were reinterred at St. David's Church in Radnor, Pennsylvania.