> The Philadelphia Campaign of 1777: Background

Washington as a Captain in the French and Indian War
by Junius Brutus Stearns c. 1851

The British defeated the French and their Native American allies in the French and Indian War (1754-1763). The result was British control over much of North America. But the war had cost England a great deal of money and Parliament decided it was time for the colonies to pay a share for their own defense.

To raise money, Parliament passed the Stamp Act in 1765. This law required the purchase of tax stamps to buy paper.

The colonists were outraged. After years of "Salutary Neglect" wherein Colonial taxes were not collected by the British, the new policy was unwelcome.

The colonists had always considered themselves Englishmen. Among the rights granted to all Englishmen was a voice in Parliament — something they didn't have. With the Stamp Act, "Taxation without representation is tyranny," became a battle cry. Rioting, rhetoric, and the calling of the Stamp Act Congress quickly led England to repeal the Stamp Act.

But many new taxation measures, such as the Sugar Act and Townshend Acts followed. The Americans reacted by forming organized political groups such as Committees of Correspondence and the Sons of Liberty. 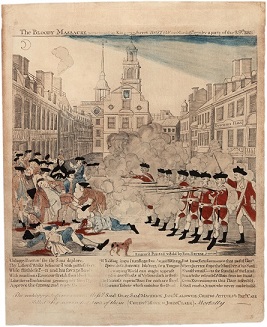 The people of Boston were most outspoken and violent in their reaction to taxes. They threatened and harmed British customs officials trying to collect taxes. So, the British quartered troops in Boston to protect their officials. In 1770, the Boston Massacre occurred as British troops fired into a group of protesters, killing five of them. This was the first blood.

In 1773 the East India Company was granted a virtual monopoly on the importation of tea. In protest, a group of Boston citizens disguised as Mohawk Indians boarded a ship and dumped 342 chests of tea into Boston harbor.

Parliament responded with the "Intolerable Acts."

This resulted in the First Continental Congress, in 1774, which met at Philadelphia's Carpenters' Hall. Twelve colonies sent delegates to discuss how to return to a state of harmonious relations with the Mother Country — not revolution! But radical thinking won out. Parliamentary acts were declared "unconstitutional." Taxes were not paid, an import-export ban was established, and Colonists were urged to arm themselves.

The "shot heard 'round the world" was fired at Lexington where armed colonists tried to resist British seizure of an arsenal. 8 Americans died in the skirmish. By the time the British returned to their lines, 273 British were killed, three times more than the number of colonists killed. The Revolution began.

The Second Continental Congress met in Philadelphia on May 10, 1775 and they declared themselves the government. They also named George Washington Commander in Chief of the newly organized army.

In June 1775, the Battle of Bunker Hill resulted in about 400 American and 1,054 British casualties. The first major battle of the War gave the Americans great confidence.

Skirmishes in late 1775 led to the capture of Ft. Ticonderoga in New York and a win at the Battle of Crown Point, under the command of Ethan Allen. However, Benedict Arnold's attempt to capture Canada for the Americans failed.

On July 4th, 1776, Congress adopts the Declaration of Independence. The United States is born.

The Americans salvaged a dismal year with Washington's Christmas night crossing of the Delaware to capture Trenton. This was followed up shortly after by a victory at the Battle of Princeton. The Americans chased Howe back to New York. Washington went into winter quarters in Morristown, New Jersey. In the Spring of 1777, The Philadelphia Campaign was about to unfold.