3b. Tipping the Scales Toward National Power

Some issues have endured throughout American history. What is meant by civil liberty? Does (or should) Congress truly represent the people? Do the courts ensure that justice prevails? How much power should lie with the President?

Daniel Webster, standing to address the Senate in the lower right, became the Senator most associated with Federalism. His counterparts and sparring partners in the Senate were Calhoun and Clay.

All of these issues have been answered in different ways at different times, but they have endured and remain central to American politics. One of the most long-standing issues is the "proper" definition of federalism. The effective balance of power between state and federal governments is perhaps the most elusive question of all, and "states' rights" remain on the political agenda.

In the mid-19th century the argument erupted into a great Civil War. In the 20th century, national power was strengthened by each President from the 1930s through the 1970s. And in recent years, the states have reasserted their rights. 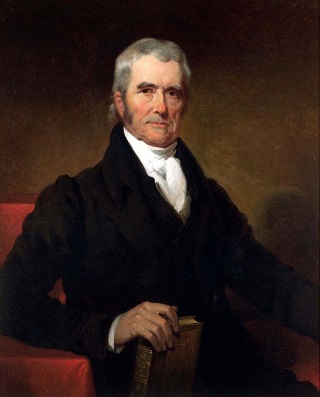 The Supreme Court often has defined the nature of federalism. McCulloch v. Maryland (1819) began to establish the "supremacy" of the federal government with John Marshall's famous decision that a state government could not tax the First Bank of the United States. The case centered on the state of Maryland's decision to tax the Baltimore branch of the national bank. The bank's cashier, James McCulloch, refused to pay, and Maryland sued, claiming that the bank was unconstitutional because the Constitution did not enumerate the creation of banks as a federal power.

Two questions were at the heart of the case. Was the bank constitutional? If it was, could a state tax it? Citing the elastic clause (Article I, Section 8) as the basis of the Court's decision, Marshall explained that even though the word "bank" cannot be found in the Constitution, the enumerated powers to tax, issue currency, and borrow money "implied" the power to create a bank. And no, the bank could not be taxed by a state because "the power to tax involves the power to destroy." States' rights supporters believed Marshall wrongly ignored the 10th Amendment, which reserved all powers not granted to the Congress to the states and the people.

Nullification and the Civil War

South Carolina Senator John C. Calhoun was a vocal opponent of federalism, especially when it interfered with slavery.

By the mid-19th century, when slavery and tariffs became controversial issues between North and South, states' rights were again a central focus. John C. Calhoun, senator from South Carolina and eventually Vice-President from 1825 to 1832, claimed that states had the right to nullify, or reject, a federal law. For example, when a tariff act negatively affected South Carolina, Calhoun declared that the state could declare the tariff "null and void" within its own borders.

Many feared that if a state rejected a new provision passed by Congress, then it also had the right to secede from the union. Decades later, South Carolina tested this notion by declaring independence from the United States. When other southern states followed suit, President Abraham Lincoln objected, and the Civil War began. With the South's defeat in 1865, national supremacy was once again affirmed, and states have never again claimed the right to secede.

The Agricultural Adjustment Administration was one of a number of "alphabet soup" agencies created by the Roosevelt Administration to combat the Great Depression. Critics of the programs said these programs gave the federal government too much power.

Although the Civil War forever changed the nature of federalism, it did not destroy states' rights. Instead, the power of the central government remained quite limited until the economic crisis of the 1930s. The devastating effects of the Great Depression led many people to demand that the federal government take drastic action. The innovative programs of Franklin Roosevelt's "New Deal" ushered in a new era in American politics.

The New Deal period was characterized by intense government action on the national level. The "alphabet agencies," such as the CCC (Civilian Conservation Corps), the AAA (Agricultural Adjustment Administration), and the NRA (National Recovery Administration), aimed to relieve poverty and economic distress of farmers, homeowners, businesses, laborers, and banks. These programs dramatically enlarged the power of the federal government, and though the states administered many of the programs, the tilt toward national power was clearly reinforced by the New Deal.

The 1960s saw another era of expansion for the national government under John Kennedy's New Frontier and Lyndon Johnson's Great Society. Many programs were initiated to declare a "war on poverty" across the United States. The federal government was growing ever larger, and taxes were growing ever higher to fund the new programs. Many Americans supported this trend and applauded the efforts of the national government to ease American social problems. But by the 1970s, others had decided that enough was enough.

Life of Henry Clay
Henry Clay was known as the "Great Compromiser," as his western origin allowed him a new perspective on differences between North and South. He drew up the Missouri Compromise of 1850, only to die two years later without knowing that his work would only delay the Civil War by 11 years. Ashland, his family home, maintains this artistic website about Clay and his work, as well as his Kentucky home.

Civilian Conservation Corps in Northern Georgia
Regional CCC camps were set up by the federal government to provide jobs during the Great Depression in parts of the country that could benefit from forestry programs. In states such as Georgia, racism and segregation caused the federal government difficulty in implementing its national programs. The website About North Georgia provides information and history for the region, and on this page spotlights the numerous local CCC camps.